CASCADIA FOREST DEFENDERS INVITES YOU TO A WEEK LONG
CLIMB CAMP
COME SPEND TIME IN THE WOODS LEARNING HOW TO:

-ASCEND AND DESCEND A STATIC ROPE
-TRAVERSE BETWEEN TREES
-USE A CROSSBOW FOR TREE ENTRY
-BUILD AND SET A PLATFORM IN A TREE
-BUILD ROAD BLOCKADES INVOLVING AERIAL STRUCTURES
-AND MUCH MORE!

Our friends down south have been working incredibly hard all year staying vigilant against Humboldt Redwood Company’s plans and hired goons. They recently sprung into action to stop logging on a Sierra Pacific Industries project and could use your support… they’ve fucking earned it.

Back to the forest… where we are going, we don’t need roads…

McKENZIE BRIDGE, OR – On October 23, Cascadia Forest Defenders [CFD] erected a road blockade at the entrance to the “W” Timber Sale to protest the current logging on National Forest Land. Already clashes have resulted in one protester sustaining minor injuries.

The protesters aim to end Seneca Jones Timber Company plan to destroy thousands of acres in the McKenzie River watershed. The road blockade consists of large slash piles, multiple cars, and a refrigerator – all serving as an anchor for a human-occupied platform suspended 80 feet up a Douglas fir tree.

The sale is part of the 2000+ acre Goose Project in the Willamette National Forest just a few miles from McKenzie Bridge. Logging began on October 16. CFD has been protesting

CFD states that this blockade isn’t about stripping Oregonians of jobs but stopping the destruction of one of the last intact roadless areas. The group hopes the companies the loggers work for are paying their employees for a full days work and the loggers can take the day off to go enjoy life away from the chainsaws.

Folks are needed ASAP at the blockade to help out the folks there. There is currently many Law Enforcement Officers present. If they leave, those there might be vulnerable to other attacks from violent yahoos. For directions call the phone number below.

End of Summer, End of Civ: The Hoedown to End it All
Saturday, October 7th
8p-12a
$10-20
$5 off entry with donation of a pumpkin, which you can carve & keep, but we want the guts
The event will feature music from Sacred Trees, The Dirty Alder Street Dandelions, and more. There will be beer and cocktails. Plus pumpkin carving, bonfire, and Pumpkin Gut Wrestling, and Slippery Square Dancing. 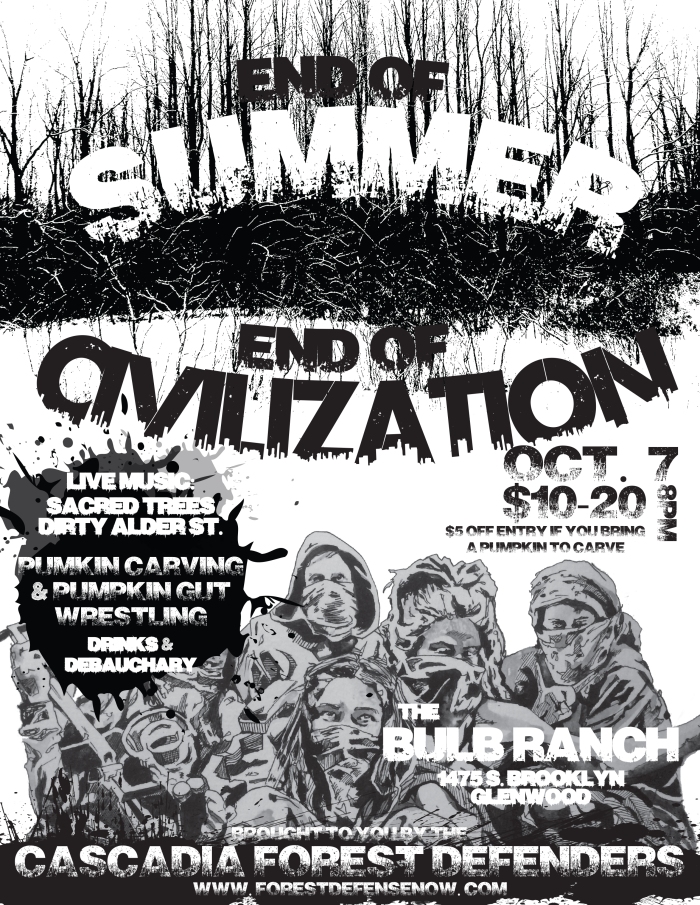 For more info on the Goose timber sale check out our McKenzie section.