Update: Watch the video about our Tar Sands Blockade solidarity action last week. Much thanks to Mike and the Occupy Eugene Media Group.

Monday, November 19th: Today, communities around the country took action against extractive industry, with a specific focus on the “largest industrial project ever undertaken by humankind” – the tar sands of Alberta, Canada. 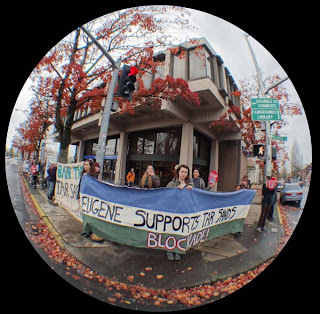 Cascadia Forest Defenders started the day off with picketing outside of Shell which owns more than 60% of the tar sands operations in Alberta. Later we moved to Chase Bank in downtown Eugene. J.P Morgan Chase is actively financing the construction of the Keystone XL pipeline which would transport diluted bitumen from the Alberta tar sands to refineries in Houston, and Port Arthur, Texas.
“We are standing here today with the indigenous people fighting for their land, the Tar Sands Blockade and all those who are resisting extractive industries in their homes.” -Ben Jones 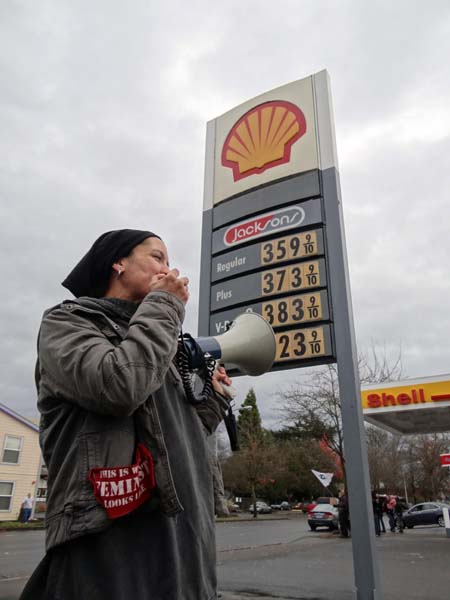 “Communities around the world are working together to expose the threat that the fossil fuel economy poses to families everywhere,” said Erin Grady of CFD. “As extractive industries grow increasingly desperate for profits, they are resorting to the most dangerous of energy reserves, like hydro-fracking, tar sands exploitation and mountain top removal coal mining.”
This week’s actions are happening in more than 35 locations including the following: