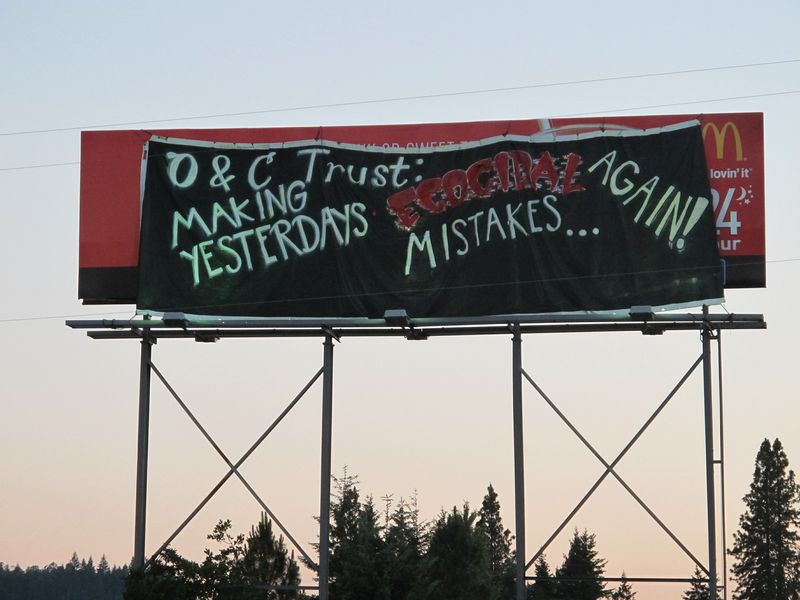 Last night under the cover of darkness a stealthy and vigilant detail of Cascadian Forest Defenders converted a billboard on the side of I-5 in Eugene to read “The O&C Trust: Making Yesterdays Ecocidal Mistakes Again!”. This billboard was re purposed in the service of forest defense in order to spread the word about the growing threat to 2.6 million acres of forest land in Western Oregon.
The Oregon and California Railroad Lands traverse 18 western counties in Oregon. They have historically been managed by the Bureau of Land Management (BLM) and now our politicians are looking to privatize huge amounts of this land.
Congressmen Defazio, Walden, and Schrader are sponsoring a bill that would give 1.6 million acres of federally managed forests to a trust of private timber campaigns. 350,000 of these acres contain trees between 80 and 125 years old, and would no longer be protected by the federal laws that allow for public comment and action when a sale is proposed.

Cascadia Forest Defenders believe that the only thing worse than a forest managed by the federal government is a forest managed by a timber company. We want the O&C Lands preserved in perpetuity and will oppose attempts to privatize the commons. We demand that Defazio, Walden and Schrader drop their proposals and instead work to preserve what remains of native forests.

We stand in solidarity with so many of those across the country and world who are fighting against extractive industry and to preserve biodiversity. We believe that drastic action needs to be taken on behalf of the biosphere and consider protection of Oregon’s forest our front. We invite our allies to join us in our struggle and want to formally voice our opposition to any proposal that compromises on behalf of biodiversity and the longterm health of ecosystems.