Author’s note: This is a factual account of recent events in the Willamette National Forest. For more information email NESTcascadia@gmail.com 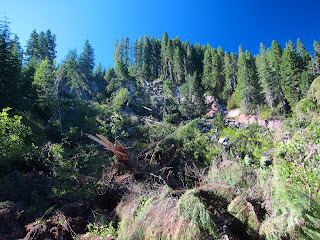 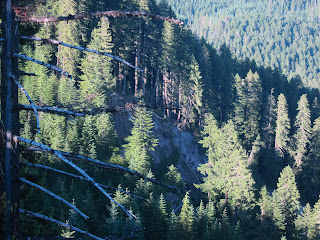 Once at the top, it’s very obvious what we were looking at. The location of the clear cut was true, and the ground had loss it’s cohesive layer that saves it from destruction of this sort. It’s part of most logging operations to incorporate a reclamation plan to protect the land and streams from surface soil run off. And when they attempt to reforest what can only be done naturally, they do a shitty job. And this is what happens. The head wall of the slide is about 20 feet tall and runs steeply downhill for 500 feet, which is most of the way down the mountain. Clear cuts in themselves are a completely destructive operation. But do it on a steep hill side, a ravine at that, and you have catastrophe a Cascadian thunderstorm away. 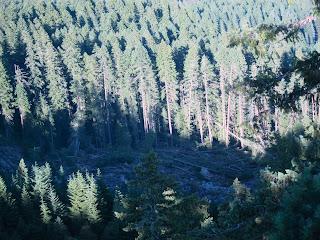 After snapping a few shots that can’t take in the grandeur of what was before us, we head back towards base camp. We still can’t believe what has happened, but we can’t wait to share the news with our comrades. Hopefully this can put some of the concerns to rest that the area is being logged. As we approach camp, we’re greeted with Rocks and Neil loading up camp. It seems as if Pete, our weathered survey veteran, has concluded by the immensity of the sounds that it had to be a surprise logging operation. Brook and Pete debate how loggers managed to punch through a logging road without the typical army of equipment. For a lack of information, the reasons begin to embellish, maybe the possibility of a new no chainsaw technique involving wedges. Pete swears he heard the ratcheting of equipment, or thought he heard the rumor of another forest road coming from the north. With all these possibilities adding up, the decision to bug out becomes even more necessary. With the growing fear that this might be an illegal logging operation, the volunteers think this is no long the time for surveying. It might be time for direct action. The group welcomes our return, but blown away by the report that the destruction is an actual landslide.
The next morning the whole group will visit the same road we were standing at the bottom of, only to be met with a fallen Western cedar across the road, two feet across at it’s midway height. These aren’t young trees falling into earth being pummeled by soil and boulders. These are old growth beauties are getting hard to find here in Oregon after years of pillaging by the timber industry. We take a hike through the pile of the flotsam of trees, and we take the view in. The landslide has made it’s way all the way down to the road. The destruction is complete, every tree in it’s path has been tossed, splintered, and destroyed. 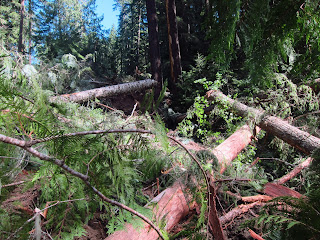 We all look at each other taken aback by this apparent ecocide that is allowed by the forest service and perpetuated by the timber industry in the name of jobs. It’s disheartening to see total destruction of such a beautiful place, but we don’t let it stop us. We gather up our gear, and head into the upper part of the unit. The rhythm of the falling trees has slowed down, but our pace to look for red tree voles picks up. The sooner we find these nests, the sooner we can stop Seneca Jones from logging the last 44 acres. Brook grabs the cross bow, and shoots a line. “Looks good. Put a rope in it and let’s climb.” And off goes Jennifer in search of the elusive red tree vole.

One thought on “When Trees Fall…”