What is the Elliott State Forest?

The Elliott State Forest is 90,000-acre tract of coastal rainforest that the Oregon Department of Forestry is ritually slaughtering as a sacrifice to the state’s Common School Fund. The Elliott was a 93,000 acre forest until 2014 when 3,000 acres were permanently sold to Seneca Jones and Roseburg Forest Products.

Through conquest and colonization the land that is now called the Elliott State Forest was stolen from the Hanis and Quuiich peoples of the Lower Umpqua tribe before European settlement. The native peoples hunted deer and elk, gathered berries, and guarded their borders closely, allowing visitors and hunters on invitation. They also gathered medicinal plants including pipsissewa and ceanothus. 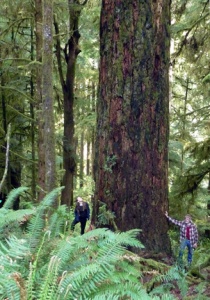 The Elliott is in Oregon’s coastal range, south of the Umpqua River, in Douglas and Coos County. The nearest towns are Reedsport, Allegany, North Bend and Coos Bay.

What do you mean by “native” forest?

We use the term “native forest” to describe wild lands that have never been logged, mined, or developed. Other folks may use the terms “virgin,” “original,” “ancient,” or “intact.” The coast has been even harder hit by industrial logging than other regions of the Pacific Northwest. By some estimates, less than three percent of the coast range is native.

Is there old growth?

The short answer is: Yes! While the Oregon Department of Forestry claims that there is no old growth logging in the Elliott, sales frequently contain pockets of old growth. Most trees in the Elliott, however, are “mature growth” trees that grew back naturally after the Coos Bay settlers fire burned most of the forest to the ground in 1868.

What plants and animals live there?

How much are they cutting?

Until this year, logging companies like Seneca Jones (Eugene) and Roseburg Forest Products clear cut up to 500 acres every year. Under a new implementation plan, which the State Land Board approved in 2011 to affect 2012, companies are allowed to clear cut up to 850 acres per year. Since summer of 2012, with the legal power of Cascadia Wildlands, all logging of known marbled murrelet habitat is halted under federal injunction! The destruction of mature forest has not stopped completely, Dean Schofield was clearcut in the winter of 2015 and had potential to be marbled murrelet habitat if it had just had more time to grow.

What does ‘management’ it look like when they clear-cut?

The terrain in the Elliott is… vertical. Company’s clearcut on steep slopes, leaving nothing to prevent land from sliding into the salmon-bearing streams. After a clearcut, ODF sprays herbicides to clear the land of anything that might compete with the next crop of douglas fir saplings. In the absence of other green life, elk and mountain beavers will eat the saplings. ODF puts plastic guards around the saplings and hires prison labor from Shutter Creek Corrections to trap (kill) thousands of mountain beavers every year. All of this is done with the support of the ethically corrupted biologists of the Department of Forestry. You can find the Coos Bay District Staff directory here.

The state needs the money for schools, right?

The Elliott is a tiny, tiny piece of the pie. The whole Common School Fund (CSF) is worth 1.1 billion dollars. Logging in the Elliott last year contributed a meager $7.7 million to that pot. CSF dished out 50.5 million dollars to school districts in 2010, which is still pennies next to Oregon’s total spending on schools every year. The State’s projected spending on K-12 education for the next two years is nearly six billion dollars. The state does need money for schools; the majority of profits from the timber industry, however, go to the timber industry, not the school children. With timber taxes being incredibly low, and the schools only obtaining a small fraction of the profits from state land timber projects, it is no wonder the schools are demanding more support.

Unemployment is a chronic issue in counties that rely on resource extraction. With the housing market crash and advances in technology, domestic jobs in timber are scarce. Roseburg Forest Products laid off over 200 Oregon mill workers in 2010 despite making record profits. We support truly sustainable forestry and an end to log exports. There is no reason to destroy the last fragments of unscathed forest when most of our mill jobs are exported to China and Japan.

What is the current threat to the Elliott?

The sale of the entire Elliott State Forest is the largest threat to the forest to date. This project is called the Elliott Transfer Opportunity. The so-called owners of the Elliott State Forest is the State Land Board, as of August 2015 the Elliott will go through a process to negotiate a new owner. This new owner could be a public entity such as National Forest, a private owner such as Roseburg Forest Products or a land trust, or it could become sovereign tribal lands. Due to the price tag of hundreds of millions of dollars, it is highly possible that only a private timber company could afford to buy it. 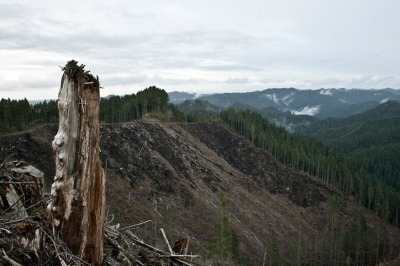 The scary part about privatizing the Elliott is private ownership could mean the end of public access to whole forest, only giving public access to 50% of the forest, including fishing, hiking and hunting lands. This could also give timber companies the freedom to define old/mature forest for themselves. According to this protocol, the interested parties will submit their ‘Acquisition Plans’ which they will have the liberty to define all of the management practices they want. There are some conservation boundaries set up, such as 120 foot buffers and conserving 25% of the old structure. However, when the company is allowed to define “old structure” they can have the flexibility to cut down the oldest trees, and say that a 50 year old forest is old enough.

Important dates regarding the sale of the Elliott:

May 11, 2016: Elliott Tour guided by big brother the Department of State Lands, CFD will also be there.

November 15, 2016: Proposed Acquisition Plans are due

December 13, 2016: State Land Board meeting deciding the fate of who owns the Elliott

Link to the Elliott Opportunity Website: here you can find all of the details of this preposterous plan.

What has ‘management’ in the Elliott been like the last few years?

Many of the timber sales of 2011 – 2013 have not been cut owing to a lawsuit filed by Cascadia Wildlands. In 2014 a timber sale called Salander Between was clearcut; the sale called Ash Valley Overlook was clearcut in fall 2014 under the guise of the term regeneration harvest. Winter of 2015 wonderful mature forest that the state named Dean Schofield was clear-cut. This area was surveyed for the marbled murrelet in the summer of 2015, however, with no occupied detection the clearcutting was legal but awful. For 2016, there might not be any timber sales that swill be cutting mature forest.

The State of Oregon hemorrhaged over 3 million dollars in 2013 on the Elliott. Cascadia Wildlands lawsuit, which had halted most logging in the forest, culminated in 28 timber sales being dropped but no long-term change in the management structure of the forest.

Due to the lack of clearcutting, in spring of 2014, the state sold a 788-acre parcel of the Elliott to Seneca Jones Timber Company and two parcels totaling 665 acres to Scott Timber Company. Each of these parcels contains documented marbled murrelet nesting habitat and ancient, never-before-logged trees. Since being sold, “private property” signs have been installed outside the parcels; locked gates deny hunters, fishers, hikers, campers, and other recreationalists’ access to the land they have shared with other Oregonians for decades. Now, anyone who dares to visit the “privatized” forest at East Hakki Ridge, Adams Ridge, or Benson will be informed that they are trespassing. Our pleasure, jerks.

Is it even legal to sell the Elliott?

This is an interesting part to the Elliott saga, as much of the lands used to be owned by the Federal Government was part of the Siuslaw National Forest. In this land transfer that happened in 1913 it was established that the state could not sell the Elliott. Cascadia Wildlands has filed a lawsuit against the state challenging the sale from 2014 known as East Hakki. The outcome of this lawsuit could make the sale of the entire Elliott illegal. This creates a major challenge to whoever ‘buys’ the Elliott in this transfer opportunity, as it would make the state give the money back, and all the time and resources spent up to that point would be wasted.

What have people been doing about it?

The devastation of the Elliott has mostly gone under the radar of environmentalists and media. For many years, Cascadia Wildlands and other groups have led hikes, organized letter writing campaigns and raised awareness about the forest. In 2009, Cascadia Forest Defense blockaded Umpcoos Ridge, a sale slated for clearcut. Law enforcement arrested 28 people. In 2011, CFD set up three blockades and a tree sit to raise public awareness and stall road construction on the West Fork of the Millicoma. It took over 50 law enforcement officers, a back-hoe, and a 125 foot crane to extract and arrest three sitters. Days later several women and transgender folks occupied an ODF office near Portland in solidarity with the forest actions. In the rest of 2011 and 2012 we protested at numerous State Land Board meetings, dumped christmas trees at Kitzhaber’s house and even hung a banner off the state capitol announcing our opposition to the SLB’s privatization proposal. We have been continuously campaigning to protect this forest. CFD actively fundraises and recruits volunteers to continue the campaign in the woods and on the streets.

Other groups defending the Elliott:

Coast Range Forest Watch is a citizen survey group out of Coos and Douglas County that is doing volunteer surveys of the Marbled Murrelet, an endangered and protected coastal seabird. They hope to be able to document the birds in their native habitat. They have had great success in their first surveying 131 ‘detections’ of the bird. Check out their website to see how to get involved.

Cascadia Wildlands is also working on protecting the wild lands in the Elliott. They are involved in a lawsuit to save the marbled murrelet on state lands. Cascadia Wildlands have been campaigning as long as we have to protect this forest. Their lawsuit has majorly slowed down the rate of timber harvest. You can also check out Cascadia Wildlands Petition to Kate Brown to encourage the governor to keep the Elliott public.

Email forestdefensenow@gmail.com if you want this information in zine format to distribute where you live!